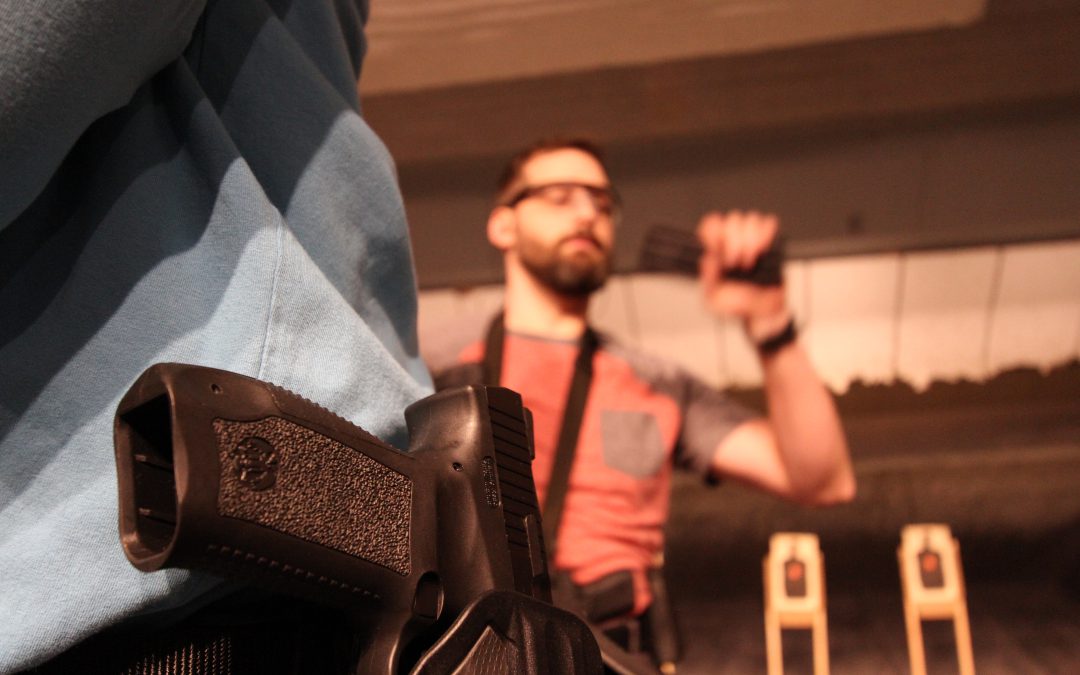 My recommendations are just that, mine. If you talk to six different instructors you will get six different opinions, that’s perfectly acceptable. Remember we live in a grey area when dealing with self -defense. Shootings are seldom black and white, so when you ask me a question don’t be surprised when I say “Well, it depends.” When searching for a holster remember the 4 requirements; it must be comfortable, concealable, secure and fast. Everyone and their brother is bending kydex these days, Black Rhino Concealment, Raven Concealment, NSR, Bawidemann just to name a few that I have used or have witnessed quality construction. With Kydex if you heat it too much or too fast it can become brittle, these companies know their materials and have great quality control. The same applies for leather, go with a quality manufacturer, Milt Sparks, FIST, Mitch Rosen, Don Hume, and Galco (high-end product lines) just to name a few. Avoid the cheap suede, universal fit holsters or holsters that collapse the second the gun is drawn (Galco, I’m looking at you). I am not saying you can’t find good products from other companies, the ones listed are just a few off the top of my head that stand out. Off body vs on body is a topic for another day, but I will say this. On-body carry is the fastest most secure method of carry. Unfortunately, it might not always be possible. In those instances, off- body carry is a viable option; however, it has its own unique considerations that I will discuss later.
Hybrid holsters, I get why people buy them. They can be quite comfortable, but let’s break them down. First and foremost let’s talk about security. They’re not; when you attach something rigid to something flexible i.e. kydex and leather, one of them is going to give (usually the rigid portion). There are numerous documented cases of guns falling from holsters because the rigid portion broke from the flexible portion during a fall. Heck, I’ve witnessed them break during class because of constant use. Another failure is the belt attachment. The spring clips combined with the holster flexing and moving with your body cause them to pop up and off the belt requiring the user to constantly reach back to secure them; there goes concealable. I’ve seen countless draws during class where a student starts to fumble with the gun due to half of the holster coming out with it; there goes fast. Students also have a terrible habit of using the muzzle of the gun to push the leather portion away from the kydex while holstering. This is a huge failure, they are now dangerous. For those reasons, I do not recommend them. However, I know people will still buy them so…. stick to Crossbreed and Galco. They both use better components than most. Finally, avoid Alien Gear. There are so many things wrong with those that I will have to do a separate post.
The Urban carry is a gimmick product, a solution looking for a problem. It fails, at minimum, on 2 of the most important requirements. Fast and secure, the Urban Carry is neither; to top it off its not accessible while sitting, and requires 2 hands to get to your gun. There is a reason why there isn’t a single professional or experienced person that uses or recommends this thing (no I won’t call it a holster). The mic holster, while it’s well-made and very comfortable it is lacking on securing the gun and speed. Now, it is possible to be fast with it, but it requires a good amount of effort. Something a lot of people, unfortunately, don’t put in. I also like my gun to be in the exact same place every time that I reach for it, the Mic doesn’t do that either. The Mic has its place, but its use should be left to those with a significant amount of experience and the legitimate need for ultra-concealment. Pair the Mic and a clip draw, now that is a little bit better, but still not for my daily use.
Just a quick bit on belts, yes you need one. No, the Walmart special will not work. The more gun you carry the better your belt needs to be. Leather or Nylon both work and there are numerous makers that have quality products, Mean Gean Leather, Galco, 5:11, Ares Gear are fine examples. A well-made belt should be rigid enough that when formed into loop (closed like when being worn) and held by the buckle, it should stay in a formed loop. With a proper carry system (belt and holster), it is very easy to carry a mid to full size double stack firearm. “Single stack guns have their place, but they are 1-2 attacker guns. We live in a 3 attacker world.” * Tom Givens
There you have it, a quick run down of what I look for in a holster. In short, stick with a leather or all kydex from a quality manufacturer. If you do that, your box of unused holsters should stay smaller than mine. This wasn’t an all inclusive list. There are a great deal of quality companies that I didn’t get to and probably more that I haven’t heard of. Hopefully you got something useful out of this series of posts.