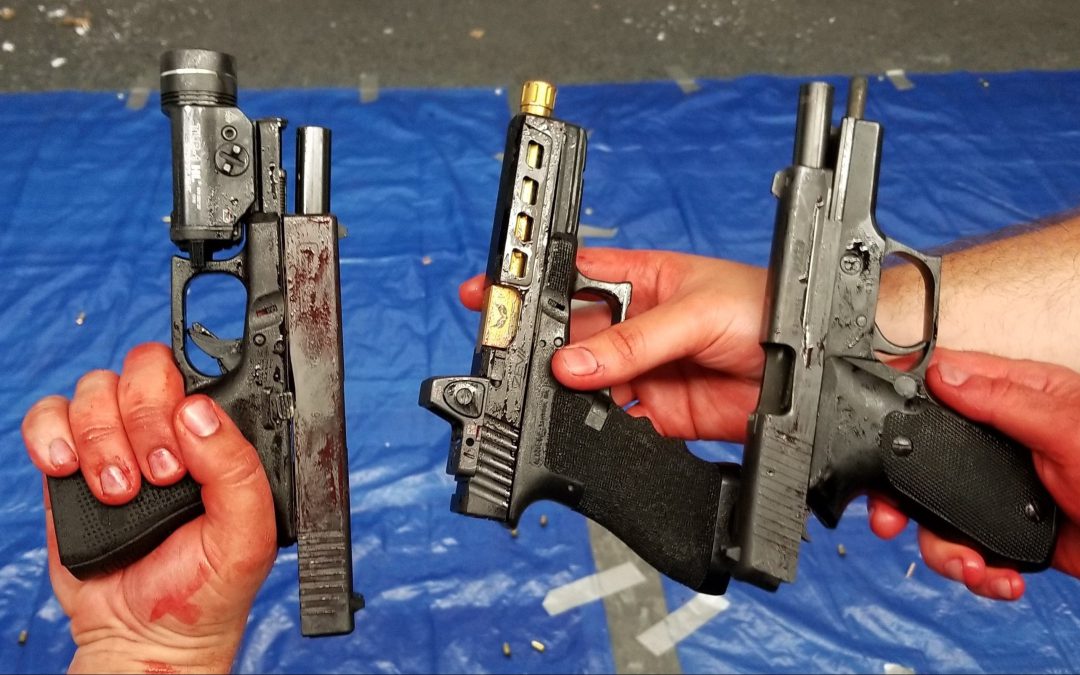 Big thanks to Dakota Schafer for coming to class and writing this up.

Class: So You’ve Been Shot

Company: Archetype of the Gun

My Background: For full transparency, Erik invited me as a guest at this class, and I only paid for my travel expenses, ammo, and range fees. I did not pay the tuition for the class. I am just a civilian with 5 years of experience carrying a concealed pistol daily (with few specific exceptions). Over the past 5 years I have attended at least two classes per year, which include mostly shooting classes such as Critical Handgun employment from Sentinel Concepts, Tactical Pistol from Tap-Rack Tactical, and No Fail Pistol from Presscheck Consulting to name a few. I had also previously taken two stop the bleed classes, which was the extent of my TCCC type coursework.

My Equipment: My “loadout” for this class was my Sig P320 VTAC with an RMO6, Tenicor Velo AIWB holster, RCS Copia dual mag holder, Blue Alpha Gear Hybrid EDC belt, 1,3OO rounds of Fiocchi 115 9mm FMJ (957 fired), eye and electronic ear pro, an on-body SOFTW on a Phlster Flatpack, a Dark Angel D.A.R.K. Lite IFAK, Alta knee pads, and other things that make two long days on the range more enjoyable. For those who don’t know that that means, were talking a camp chair, cooler with a mixture of water and sports drinks, sunscreen, etc. Erik provided all training medical equipment.

Class Demographics: Including me, there were 6 students in this class for both days, and it was primarily made up of armed civilians, with the exception of one LEO. One of the other students was a career long paramedic who served in the same organization as Erik.

The Range: The Compound is a private range that primarily caters to LEO training, but also lets a few select instructors teach open enrolment courses there as well. It is gated, and is very specific about the time frame you are allowed to be there. That said, it was my second time there, and I did not feel inconvenienced or limited at any time. The bay we were in was asphalt, which made for easy cleanup. Erik had canopies set up to get us out of the sun, water, D-lead wipes, electrolyte powders, sunscreen, etc. He also had targets, adhesive spray, markers, and whatever else we needed to make target repair efficient and easy.

TD1 Morning: The morning started at 8 AM with an introduction from Erik, as well as a safety discussion and a briefing on the emergency medical plan. At that point we rolled right into Erik’s presentation on TECC. He went over all of the requisite concepts of TECC, and had plenty of personal experience from his time as a Chicagoland EMT to throw in to the discussion. There was also some hands-on time with TQ’s and wound packing, and also got to discuss EDC considerations for medical gear. This segment ended at 12 PM and was followed by a “working lunch” in which we ate and hydrated while gearing up for the shooting portion of the class.

TD1 Afternoon: There was only one relay both days, which allowed everyone to get as many reps as they wanted. Most drills were shot with a magazine of ammo instead of a specific round count. The range portion of TD1 started with a basic confirmation of skills segment where students were evaluated on their skill level, specifically their overall gun handling. That was the main segment where we were shooting freestyle, and then we quickly moved on to refining our one handed shooting skills, which should come as no surprise, as this class is primarily based around the injured shooter. One interesting aspect of that block was that we did some mirror image shooting (shooting with a freestyle grip, but with our non-dominant hand). On it’s face I was skeptical as to why we were doing it, but I then found out that it was to get us in the mindset that we can use our injured hand to help stabilize the gun if we have enough mobility with it. We may not go all the way into a standard thumbs forward grip, but we can absolutely jam some meat into the side of the grip. Throughout this time, Erik would come around to all of us and offer tips and suggestions to improve our shooting fundamentals as he saw deficiencies arise. Towards the end of the day we started to work on movement, which also included a block on muzzle management. Some dry runs were done to make sure everyone could move safely with their guns. The live runs wrapped up TD1, and we ended the day with a quick clean up on the range.

TD2: TD2 started at 8 AM again. Having covered movement during TD1, we jumped right into positional shooting. This was where knee pads came in handy, especially being an asphalt range. We then worked on use of cover with some VTAC barricades, integrated getting in and out of various positions while behind cover. From there we worked on malfunctions and reloads with only one hand, and got to shoot with some stage blood covering our hands (and red dots for those of us running them). After that we moved into our final drill/test. Without going into too much detail, we set up a drill with multiple targets, no shoots, turners, multiple shooting positions behind barricades, malfunctions, reloads, self-application of tourniquets, and quite a bit of ambiguity in terms of how threats were engaged and when events would happen. We ran through this drill twice, and it allowed us to see where we were at in our skills when problems started to be stacked on top of us. Problems arose, and we were expected to solve them. For instance, I had a CAT (uncertain of generation or even authenticity. It was a trainer anyway.) that when applied was bending the catch open and letting the windlass loose. I had to fight pretty hard to get it to stay long enough to get the retention strap over the catch to hold it all together. Ideal? No. Useful to go through first hand? Yes. I haven’t seen that from current CAT’s, and absolutely don’t believe it to be an issue. That said, stuff fails, and we need to be ready to “stay in the fight” as we work through problems that come up. At the end of the day we cleaned up the range, which was made easy by the asphalt range, and debriefed what we had learned. Erik offered his time and attention any time we needed it in the future.

My Overall Experience: The class was absolutely worth the price of admission (had I paid it). The mixture of medical skills, shooting skills, and the culmination of them both at the end was extremely valuable, and I highly recommend anybody carrying a gun for personal protection take this class. Personally I appreciated the experience Erik brought to the table, and how accommodating he was for us students. We wanted for nothing on that range.

If there is one thing I would add, it would be to add a brief overview of the TECC concepts on TD2 and/or toss in some application throughout the range time. Maybe make students have a training TQ on body and call out some injured limbs to TQ randomly during class.

In this community, it seems to be more difficult to get people fired up for medical classes compared to shooting classes, even though the odds of you needing medical skills throughout your life are much higher. A class like this merges the two and might be enough to pull some of the fence sitters over on the medical side of things while still getting to send some purposeful lead down range.

Check out Primary & Secondary, ModCast 203 for more commentary on the class