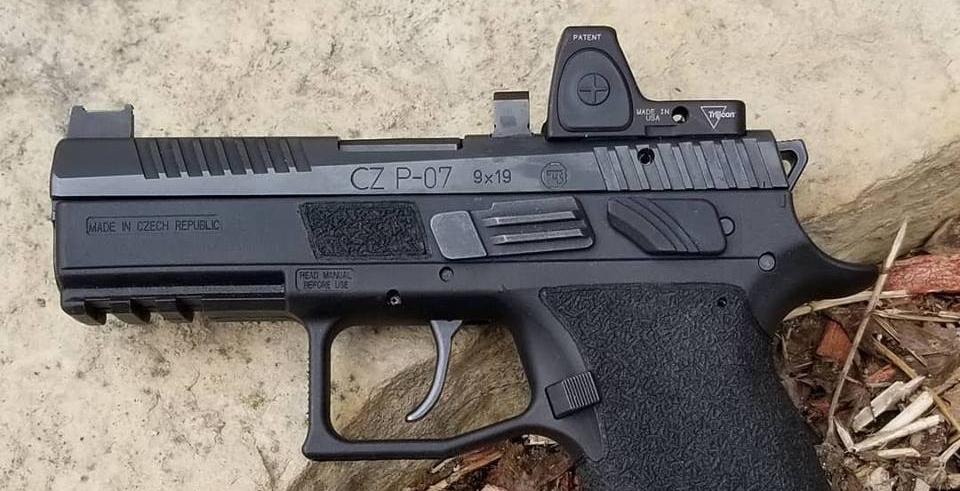 So, I am about 9 months into the red dot life and I have been very happy. There is a learning curve, but I feel it is worth it. I have been teaching and taking classes with this set up and feel it has performed very well. “If you ain’t cheating, you ain’t trying hard enough” is how I look at fighting with a gun. I have talked previously about stacking the odds in your favor and having a red dot on your gun does just that. I am not saying that you can’t win a fight or run your gun well without one, but they do offer a distinct advantage.

My primary carry gun has been the CZ P07 with a Trijicon RMR 06 on it and my back up and training gun is a P09 set up the same way. I have 2 guns with back up sights that are forward of the optic and 2 guns that are behind the optic. Most people won’t have a preference until they shoot for a while, but I prefer to have the backup sights forward of my optic. I prefer the obstruction in front of my glass, and it gives a modicum of protection to the optic during 1 handed manipulation. Since I prefer to have back up iron sights on my gun, I’m not really loosing anything in that regard.

The obvious advantage is better accuracy and speed at distance. The saying goes “Distance favors the trained shooter” and that goes double for having a red dot. At a distance as close as 10 yards I am getting faster more accurate shot placement with an optic. I am no slouch with iron sights, but this is where I start to see a performance increase. When you increase the distance from 12yds out to 25yds it just doesn’t compare. Now, part of this is the fact that most people’s iron sights start to obscure the target at 12yds, especially with a 3 dot or factory sights. This isn’t as much of a problem for those with aftermarket sights like Dawson Precision. Though, lining up a single focal plane is much more efficient than lining up 2 focal planes on a target. With a consistent presentation of the gun, most people can get by this, but you can’t argue the fact that just putting the dot on what you want to hit is much more efficient. No longer do I need to approximate where I am aiming at greater distances, because the target just isn’t obscured.

Shooting up close is just as easy. With a consistent presentation, the gun is going to the same place every time, the dot will appear just as easily and the focal plane benefits from above come into play here again. Yes, at first it may appear as though you are slower up close, but I found that with practice that goes away. I am not usually a proponent of point shooting anywhere past 3yds, and this isn’t truly point shooting, it more like a flash sight picture. At 10yds and in, I can line up the cat ears that make up the top of the RMR on the shoulders of an IPSC or silhouette target and make shots in the high thoracic cavity with ease. Where a dot can slow you down up close is if you lose your dot. For me this happens when I have a sloppy presentation or poor grip. I will sometimes find myself hunting or fishing for the dot, and this slows me down. You can mitigate this problem 2 ways. First, obviously, is have a solid and repeatable draw stroke, not removing the gun from the holster until you have a good grip on the gun. Steve Fisher says, “You only get what you get, when you get it”. In this context that means not pulling your gun from the holster until you know that your grip is right. Put another way, Dave Spaulding is fond of saying “Don’t be a grip dick and accept a shit grip”….or something to that effect. The second way to mitigate this is accept that the dot isn’t where it is supposed to be and switch to iron sights. This accomplishes 2 things. It gives you a sight picture so you can get accurate hits on target for you first shot, but it also puts the gun in the correct position and your dot will reappear in the window for your follow up shots. To paraphrase Tom Givens, it doesn’t matter why the bad thing is happening to you, accept it, move on and fix it. So, don’t waste your time trying to find the dot when you have other methods available to you to make your hits.

Red dot sights also give us options. Specifically, we have two methods of aiming. I don’t mind having a backup. Any mechanical device will fail, and I have had both red dot optics and iron sight fail me. Batteries die, zeros can shift, glass can break or fog up. I have also had iron sights walk out or just shear off. Again, I like to stack odds in my favor. This wasn’t a primary reason for deciding to put a rds on my carry gun, but it doesn’t hurt. The optic also gives me a larger surface area for manipulating the slide, with either both hands or single handed. Plus, you can use the optic to run your slide off or objects. Now I don’t recommend using the optic as a primary method of running my slide, but if I am under pressure and miss my mark or grip the rds is there. If you have a quality optic like Trijicon RMR you aren’t likely to hurt it, but its possible. If you are curious as to how your optic performs check Aaron Cowan’s’ white paper on red dot sight. It is an evolving document on all of the popular options.

Dot size is something that each shooter has an opinion on. Currently all of my dots are on the smaller side, 3.25 moa and down. My future rds optics will probably be 1 moa. There are those out there that say a bigger dot is better for fast acquisition and they aren’t necessarily wrong. It is a personal choice. For me though, a smaller dot has more benefits, particularly at distance. It covers less of the target allowing me to be more accurate. I haven’t had any problems acquiring the dot and if I want it to appear bigger, I just bump up the brightness.

RDS maintenance is something we need to discuss. As I said previously, all mechanical devices fail at some point. We can mitigate this though. First by purchasing a quality optic. The rest falls on our habits. Begin by mounting it correctly, with witness marks and properly torqued screws. Check your witness marks every time you use or clean the gun. Next you want to take care of your glass. I like to use Cat Crap. The anti-fogging agent keep the glass clear throughout the day and aids in cleaning. Make sure you apply it the right way and you shouldn’t have any problem, but remember, Murphy gets a vote. Batteries, if you buy the right ones, are relatively trouble free, I like Duracell. Change them annually or sooner based on your brightness settings. Pick a date that is easy to remember…January 1st, your birthday, Christmas etc. A tip I picked up from Matt Jacques, Victory First, is to use a sharpie to write the date on the battery. This is particularly helpful if you have multiple guns equipped with red dot sights. My carry gun battery gets swapped annually, regardless of use. But my training and rental guns get changed when they die.

So, who benefits from a red dot….almost everyone. New shooters, shooters with failing eye sight, and shooters who may be experiencing some eye fatigue from shooting for long periods of time. During my “So You’ve Been Shot” course we do a impaired vision drill, where I blur the dominant eye, by the end or the drill most shooters are surprised at how easy it is to transition with the dot. The red dot provides advantages to all these shooters. Primarily what the dot does is simplifies the aiming process. As I said before a single focal plane is easier to use, no matter which of the above categories you fall into the red dot will help. Think about this, if you wear corrective lenses or glasses, will you have time to put them on in the middle of the night? What happens if they get knocked out or off in a fight? The dot can help with both and more. New shooters benefit because there is less to focus on when starting off. Which is easier, lining up the iron sights with equal height and equal light or just putting the dot on what you want to hit? The ability to stay target focused with a rds gun doesn’t hurt anyone. Especially when that is where we tend to focus under pressure.

So this is where I am at currently. This may change or it may not. I have only been shooting RDS guns for the past year or so and I am still learning. Will I come to a point where I stop trying new techniques… not likely. One of my personality traits is that when I get into something, I tend to go all out and become almost obsessive. That commitment is something my family and friends will attest to, be it good or bad. I hope you find this useful and is shortens your learning curve by passing on what I have experienced. Don’t forget to check out Steve Fisher, Aaron Cowan, Scott Jedlinksi, Chuck Pressburg and Matt Jacques for more info on rds guns.