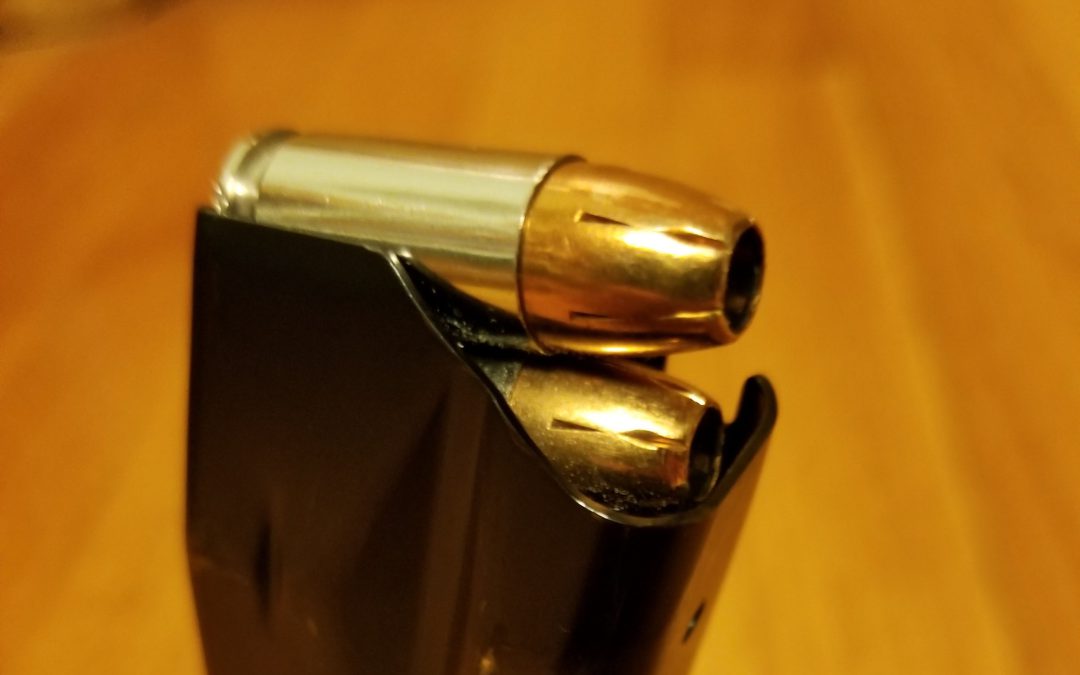 So, you have purchased your first handgun and now you need to feed it. Let’s start with some basics. Ball ammunition is used for practice, punching holes in paper. Hollow point ammo is used for social work, punching holes into people. We use hollow point ammo because it is more effective at stopping a threat and it is safer to use in public.  In a self-defense shooting there are likely to be innocent bystanders around; when hollow points expand they dump their energy, making them less likely to over penetrate and strike an unintended person. Think of its expansion like a parachute. If we were to use ball ammo there is a high probability of the rounds passing straight through the threat and into someone else. Ball ammo comes, generally, in two varieties; copper jacketed (FMJ= Full Metal Jacket) and lead nose (LRN= Lead Round Nose). The two examples listed previously are not the only variations of jacketed or lead bullets, there are, many, many more. Hollow points have many varieties as well. Long story short, use what law enforcement uses, avoid anything that sounds too good to be true. If it sounds gimmicky, it is. If that “wonder” round was so good, then, the people that shoot bad guys for a living would be using it. How many more ways can I try to make my point? The federal government has done substantially more testing of ammo then you and the next 30 backyard testers could ever do. I’d wager that they have spent hundreds of thousands of rounds and dollars, if not millions; take advantage of that. It also wouldn’t hurt for you to look up the work of Dr. Martin Fackler and Dr. Gary Roberts

For the initial break in period and reliability testing I recommend the cheapest, quality ammo possible; unless the guns manufacturer recommends otherwise. Always follow the manufacturers recommendations. The length of this period will vary depending on what firearm you choose. Once that period is completed you must find out what rounds you like. By this I mean bullet weights. Different weights will have different characteristics such as recoil, point of aim vs point of impact, bullet drop etc. 9mm, for example, the most popular loads are 115gr, 124gr, and 147gr. Each weight will perform differently based on what gun they are being used in. Pick the load that has the best performance for you and what your usage is.

Once you know what bullet weight you like, now it’s time to pick a self-defense load. You could start with these loads first, but it could end up being more expensive. Stick to the same weight that you did for practice, it should have similar characteristics; if not use the same process as you did with the ball ammo. It should take less rounds now since you already know what you are looking for. A self-defense round must feed reliably 100% of the time, no exceptions. They must go bang every time, no exceptions. Not every gun likes the same ammo; so, we are checking for the same things we did during the initial break in period. The difference now is that we know the gun works; therefore, any deviation is bad. If at any point the gun fails to feed the ammo, the gun fails to go bang, or fails to extract; that is unacceptable. I recommend 200rds without any problems before deciding to carry that ammo for self-defense. That may seem like a lot and it won’t exactly be cheap. So, if your budget does not allow for that, at minimum I say 50rds.

My recommendations, Speer Gold Dot, Federal HST, and Corbon DPX are my top three for pretty much every caliber. Winchester Ranger T is good too but can be hard to find. There are other brands that work and will do the job but, they are inconsistent throughout each caliber. They will require you to do more research when choosing. With the above three brands you are pretty much guaranteed to find them in store and in every caliber. The above also perform very consistently across all the common self-defense calibers. Another consideration is your practice ammo and self-defense ammo should be the same or as close to the same weight as possible. If you end up with a micro gun and use HST micro 150gr, I’m not aware of anyone making ball ammo in that weight. In that instance go with the closest weight as possible, 147gr. One final thought, there is ammo made specifically for guns with barrels less than 4in. The powder in this ammo burns at a faster rate than “duty” ammo (duty = 4in barrel or longer). This allows the bullet to achieve the velocity it needs for consistent expansion out of a shorter (burn time) barrel.