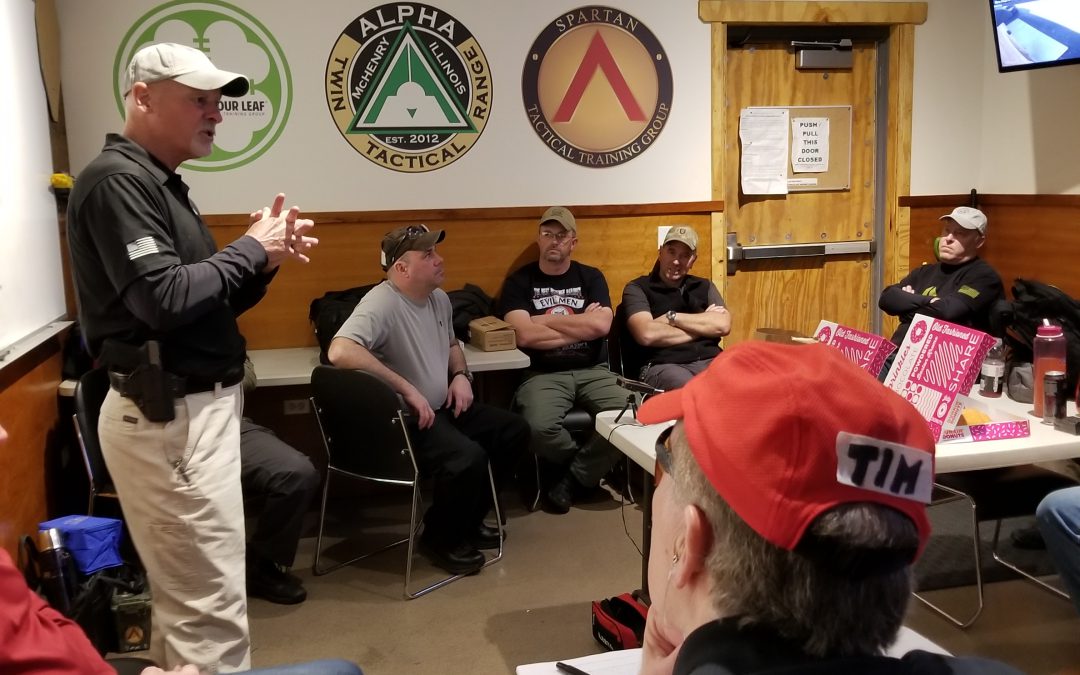 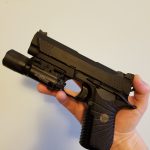 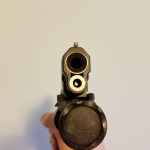 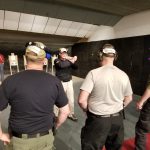 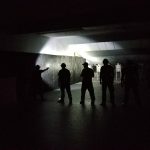 Everything listed above performed as you would expect.  The gun received 4 drops of lube total, 1 per rail after day 1.  I had a single user induced double feed during a press check with the EDC X9.  Everyone that asked was surprised at the lack of carbon build up on the fiber optic front sight.  While some sights had a slight advantage over the fiber optic, I was in no way hindered by it.  In particular, Dave’s own Ameri-glo photo-luminescing/ tritium combo front sight impressed me greatly; but he quickly points out that the luminescent sight only serves as a reference point.  They aren’t always used for true aimed fire.  With the taught techniques I was able to put all of my shots from 3-15 yds in the thoracic cavity target in almost complete darkness (a handful of expired chem- lights for safely marking the firing line).  The green fiber optic was lost in smoke with some techniques, but quickly reappeared with a shift of the handheld light.  The gas pedal switch on the EDCL2-T was problematic with about half of the mated techniques.  The switch on the Tactician was significantly better in that regard.  The gun mounted light really does have some significant advantages, but it is not without its own problems. I also played with a 6p, with and without the Thyrm switchback and various combat rings.

Prior Experience: 36yo, medically retired CFD medic (18yrs), owner of Archetype of the Gun.  Past training with Clint Smith, Tom Givens, Massad Ayoob, Andy Kemp, Bob Houzenga, Robert Militello, TEMS, TECC, Critical Care Paramedic, UTM Instructor, NRA Instructor, Rangemaster Instructor.  Rifle, shotgun, handgun and executive protections classes from the above.  My normal carry is a Sig Sauer p229, 9mm with the same set up as above with 1 spare mag, occasionally a Ruger LCR on my weak side ankle.

Preparation: Less than 100rds through gun for function check and zero, coupled with pampering the wife for a couple days prior.

Range: Alpha Range in McHenry IL is a private range consisting of 2 bays with ability to shoot 180 degrees.  Class was hosted by Mickey Schuch owner of Carry Trainer.

Class Demographics: Mix of 16 armed citizens, LEO/MIL/GOV, and Instructors.  All male class, age range from 20’s- 70’s.  I believe 1 gentleman in his 50’s- 60’s is taking 40+ classes this year, I am slightly envious.  Retirees and true gun-fighters were in attendance; 1 local in particular that everyone in the professional community has read about but keeps very low key.  I was shooting next to him all weekend and didn’t find out until after lunch on TD2 who he was and who we both knew, it really is a small world.

Training Day 1: Class began with the usual safety and legal brief, followed by approximately 1hr of power point.  The remainder of the 16hr class was spent on the range.  Class was broken into 2 relays of 8 shooters.  All skills were practiced in the light until we were able to perform them safely.  Dave began with his usual 3 round walk out drill.  3 shots on a 3×5 card beginning at 3yds and ending at 15yds (max distance available for this size group).  Dave than evaluated each individual target and made the necessary corrections.  Dave pointed out that I started out with what he refers to as “SHIT” grip, which lead me to throw a couple rounds low and outside the 3×5 target.  This was quickly remedied, and my accuracy was within reason for my usual standards the remainder of class (100% FBI instructor, 96.7% Rangemaster instructor).  Dave’s manor of instruction is very matter of fact, some would refer to him as an asshole or a dick, they are wrong and need to thicken their hide.  He had some particularly feisty moments and hugs were given out freely.

This wasn’t just a class on using a flash light.  Dave takes aspects from his other courses and combines them with his low light curriculum.  We reviewed Dave’s “Arc of Ready” and its continuity with use of a handheld light.  We ran multiple “Arc of Ready” drills until everyone was performing them well with 2 hands and 1 hand.  Next, we added the handheld light to each of the positions.  We worked through standard techniques, Harries, FBI, Surefire/Syringe. We also worked the Graham method, the Chapman method, the Ayoob method, center index, and neck index until we could make our own educated decision on each.  Dave made sure we had adequate time to work through each.  There was also plenty of swapping of lights to experience the pros and cons of each light and each technique.

We than moved onto malfunction and reload drills with the handheld lights. We worked the ditch and bury methods with the light; and inboard vs. outboard with slide manipulation. Dave’s preferred inboard manipulation definitely had its advantages with a handheld light.  We finished TD 1 with a primer for TD 2 and 1 handed techniques to increase accuracy.  Which you will have to take a class to learn more about.

Training Day 2:  I apologize because there is a lot of stuff today that I can’t write in detail about; you have to take a class if you want what makes Dave special.  Dave is fond 3 shot strings during practice.  His reasoning is 1x = luck, 2x = happenstance, 3x = skill/ recoil control.  During TD2 we were encouraged to incorporate weapon mounted lights into every drill we ran, as to determine when each light was most useful.  We started with some confidence building with our gear and ourselves.  No light shots on Dave’s thoracic cavity target from 3yds-15yds.  I won’t give away his insights here, but he is very effective.  We continued on to lateral movements, prone and barricade techniques with single and multiple targets; as well as stationary and moving targets.  We discussed in depth “why” we did things frequently.  Dave is big on “why” and it was well received.  We also worked some of Dave’s signature drills on timer.

We finished off with a competition for one of Dave’s Ares Gear belt buckles.  Dave’s 2x2x2 drill was the game.  In order to successfully complete this drill everything must be perfect.  Stance, grips, driving the gun out onto target, sights, trigger work, recoil control all play a critical factor in completion.  Very few can accomplish this on demand, even with dry fire warm up.  Even fewer have accomplished this more than once, I believe there have been 3.  I was happy with my performance, a time of 2.59 seconds from concealment.  I had a 1-inch group with 1 shot in the target and 1 shot just over the line, a quarter inch above the first shot.  No one from our class ran it clean, though some were a fraction of a second off.  Over the next 2 days Dave ran a closed course for the McHenry county sheriffs.  Belt buckle #14 was awarded with a time of 1.87 seconds.  It was completed with temps in the 30’s, freezing rain and snow.

This class was well worth the investment.  I have tried previously to attend his courses always to end up on the waiting list.  Dave plans on retiring soon and is slowly removing courses and available dates. If you have ever had the inclination to take a course from him, do it while you can.  Dave doesn’t run tactical band camps.  His courses are pure practical information.  There are no Hondo rolls or tacti-cool BS.  If you want straight forward, proven information and skills, then Dave has what you’re looking for.